Register Now to Attend "Meet the Funders" on June 11

This meeting has been approved for 3.25 hours credit for the County Elected Officials Training Program.

The event is free, but registration is required. Please click HERE to register.  Space is limited to 40 attendees, so you are encouraged to register right away. 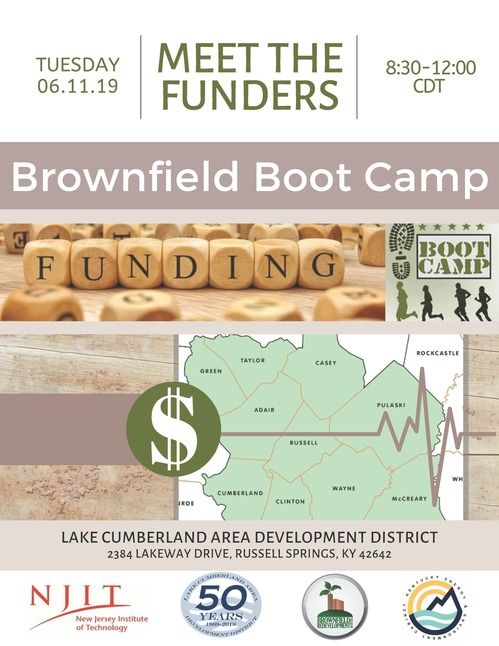 Click on the image above to view the meeting agenda and learn more about the speakers.

On April 23, 2019, the Lake Cumberland Area Development District, Inc. (LCADD) will celebrate 50 years of service to Adair, Casey, Clinton, Cumberland, Green, McCreary, Pulaski, Russell, Taylor and Wayne Counties. The public is invited to celebrate this milestone anniversary during an open house to be held at the Lake Cumberland ADD’s office located at 2384 Lakeway Drive in Russell Springs on Tuesday, April 23 from 10:00 a.m. until 2:00 p.m. central time.

LCADD is governed by a Board of Directors which is comprised of the County Judge-Executives, Mayors and non-elected citizen members from the 10-county area.

Over the past 50 years, the Lake Cumberland Area Development District has evolved in response to ever-changing community needs, and continues to provide a wide range of services to cities, counties, businesses, non-profits and individuals.

The Lake Cumberland Brownfields Committee will meet on Tuesday, April 30, 2019, beginning at 11:30 a.m. central time. The meeting will be held at the Lake Cumberland Area Development District located at 2384 Lakeway Drive in Russell Springs, Kentucky. During this meeting, educational information will be presented about the Brownfields program and the committee will approve properties for environmental assessment. The public is invited to attend. Lunch will be provided. Please RSVP by contacting Chari Bennett at 270-866-4200 or chari@lcadd.org.

If you missed the "Best Practices For Animal Shelters" meeting last week, you can watch the recording of Dr. Pizano's presentation by clicking on the VIDEO button below.
Video 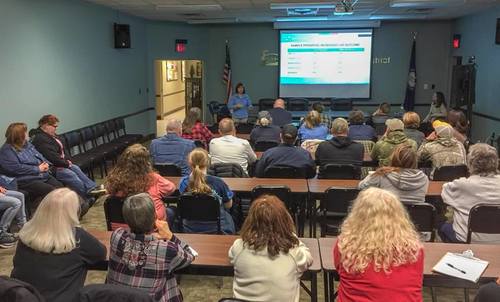 Please join us on March 7, 2019 at 5:30 p.m. CENTRAL at the Lake Cumberland Area Development District, 2384 Lakeway Drive, Russell Springs, Kentucky, for “Best Practices for Animal Shelters,” presented by Dr. Sara Pizano, Veterinarian, National Animal Welfare Strategist, and creator of Team Shelter USA. Dr. Pizano’s presentation is sponsored by the University of Florida—College of Veterinary Medicine, who has chosen the Lake Cumberland Area Development District as a recipient for one of its prestigious PRO BONO animal shelter and community assessments. Dr. Pizano leads the assessment team for the University of Florida.

Topics of discussion will include: proven strategies to end euthanasia as population control, providing alternatives for shelter intake, public policy, targeted community programs, and other ways communities can help more animals, even with limited resources.

This meeting is open to the public, members of animal welfare and rescue organizations and volunteers, government officials, and interested citizens all are encouraged to attend this important presentation to implement proven life-saving Best Practices that will help us improve animal welfare services throughout south central Kentucky. This model has been implemented in the Northern Kentucky Area Development District with tremendous success, and we are excited for the opportunity to repeat that success here in our Lake Cumberland region!

On behalf of the University of Florida, Team Shelter USA, and the Lake Cumberland Area Development District, we hope you will join us to learn how you can be part of this regional life-saving collaboration!

If you have any questions, you can also contact Heather Stevenson at: Heather@lcadd.org.
Click Here For Your Invitation 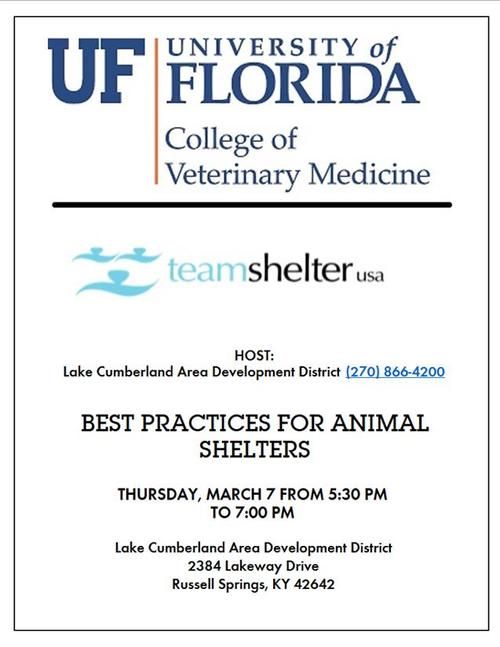 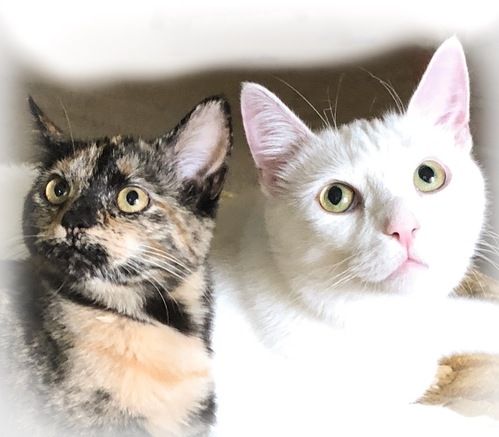 It was announced at the January 2019 LCADD board meeting that the University of Florida—College of Veterinary Medicine has chosen the Lake Cumberland Area Development District as a recipient of one of its prestigious PRO BONO animal shelter and community assessments.

Dr. Sara Pizano, who leads the assessment team for the University of Florida, gave a brief presentation to the LCADD board outlining the assessment process and giving specific examples of successful program implementation.

Dr. Pizano will begin onsite visits in the LCADD area the week of March 4, 2019. She will tour local animal shelters and meet with each county judge-executive in the district.

LCADD Board Holds First Meeting of 2019

On January 24, the Lake Cumberland Area Development District’s (LCADD) Board of Directors held its first meeting of 2019 at the district’s office in Russell Springs. The full board is automatically comprised of all judge-executives and mayors from Adair, Casey, Clinton, Cumberland, Green, McCreary, Pulaski, Russell, Taylor and Wayne counties. In addition, 20 citizens from all 10 counties serve on the Board.

As McCreary County does not have an incorporated city, the Board appointed Doug Stephens as a mayor-designee to represent an elected official position.

The Kentucky Department for Local Government is accepting Land & Water Conservation Fund applications through May 30, 2019. County and city governments are eligible to apply for grant funds to help finance a variety of public outdoor recreational facilities, such as campgrounds, picnic areas, sports and playfields, swimming, boating, and fishing facilities, trails, natural areas, passive parks and more. The Land & Water Conservation Fund is a matching reimbursement program.

The Lake Cumberland Brownfields Committee will meet on Wednesday, January 30, 2019 beginning at 11:30 a.m. central time. The meeting will be held in the conference room of the Lake Cumberland Area Development District located at 2384 Lakeway Drive in Russell Springs, Kentucky.

The purpose of this meeting is to approve properties for environmental assessments. The public is invited to attend. Lunch will be provided. Please RSVP by contacting Chari Bennett at 270-866-4200 or chari@lcadd.org. If you are unable to attend in person, you may join the meeting online at https://zoom.us/j/3093133183.

If you wish to nominate a property or properties for assessment, please be prepared to give a brief (five minute) presentation about the property’s past use, current condition and future redevelopment plans so the committee can rank the site. Feel free to bring maps, photographs and any information you think will be beneficial.

Property owners must be willing to participate in the Brownfields program and sign a site access agreement prior to assessment. If the owner has given verbal consent, the committee can approve the property contingent upon receiving written authorization. Due to grant received from the USEPA, LCADD is able to provide these assessments at no cost to the property owners. Additional sites will be approved for assessment at future meetings as funding allows.

If you have any questions about the Brownfields program, please contact Chari Bennett at 270-866-4200 or chari@lcadd.org.

Click here to learn more about the Brownfields Program.

Brownfields experts in attendance will include: Derek Street, EPA Region 4 Physical Scientist; Herb Petitjean, Kentucky Brownfield Program Coordinator;  Elizabeth McNulty, Environmental Education Specialist with the Kentucky Energy and Environment Cabinet; and Robert Perkins with Wood Environment and Infrastructure Solutions. These knowledgeable and experienced panelists are sure to make this a valuable and informative meeting.

The public is encouraged to attend and learn how the Brownfields Program can benefit their community. Lunch will be provided.  Please RSVP by contacting Chari Bennett at 270-866-4200 or chari@lcadd.org.

Click here for additional information about the Brownfields Program.

The Lake Cumberland Area Development District (LCADD) was recently awarded a $300,000 EPA Brownfields Assessment grant. This grant will be used to develop an inventory of potential brownfield sites, conduct Phase I environmental assessments, Phase II assessments as needed, and create remediation plans. Please see our educational brochure for more information about Brownfields: What Are Brownfields?

LCADD’s  first step to implement this grant is the development of a comprehensive inventory of all Brownfield properties located in our 10 county district. Your assistance is needed to identify potential Brownfields in your county. Please complete the Brownfield Property Nomination Form to nominate a property or properties for inclusion in the Brownfield inventory. It is not necessary to own or have any affiliation with a property to nominate it as a potential Brownfield.  Forms may be mailed to Chari Bennett, P.O. Box 1570, Russell Springs, KY 42642 or e-mailed to chari@lcadd.org. If you have questions, please contact Chari at 270-866-4200.

The meeting offers an opportunity for jurisdictions to make additions and/or provide updates to the current Hazard Mitigation Plan, which can be viewed at http://lcadd.org/hazard-mitigation-plan.

The Plan, which is submitted to FEMA for approval every five years, forms the foundation for long-term strategies to reduce disaster losses and break the cycle of disaster damage, reconstruction and repeated damage.

Funds from the Lake Cumberland Area Development District’s community-wide hazardous substances and petroleum grant will be used to assess brownfield sites in McCreary and Wayne counties, two of the 10 south-central counties served by the district. Grant funds also will be used to update a brownfields inventory and support community outreach activities. Read more

Lee Smith with the Russell County Sheriff’s Department was the guest speaker at today’s Regional Elder Abuse Council Meeting held at the Lake Cumberland Area Development District in Russell Springs. Smith presented information about the different types of scams that are currently occurring within the region. He said scammers often target senior citizens who are among the most vulnerable in our communities.

The Regional Elder Abuse Council is made up of community partners from the region who come together to form a coordinated multidisciplinary response to elder maltreatment, defined as the abuse, neglect and exploitation of the elder population.

One of the goals of the Council is to address issues of prevention, intervention, and agency coordination of services on a state and local level through interaction with local groups or entities that directly or indirectly provide services to the elderly.
The Council meets quarterly at the Lake Cumberland Area Development District. For more information, contact Mandy Weston, Ombudsman, at 270-866-4200. 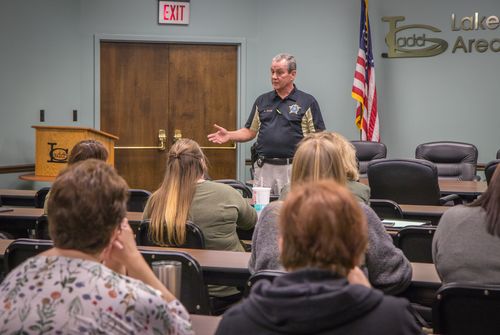 During a meeting held on April 20, 2018 for our senior center directors, LCADD Executive Director Darryl McGaha thanked Cathe Haynes (left), Pulaski County Senior Center Director, and Mitzi Hay (right), Taylor County Senior Center Director, for their many years of service to the agency and congratulated them on their upcoming retirements. Cathe will retire on June 1, 2018 and Mitzi will retire on August 1, 2018. Congratulations to both! 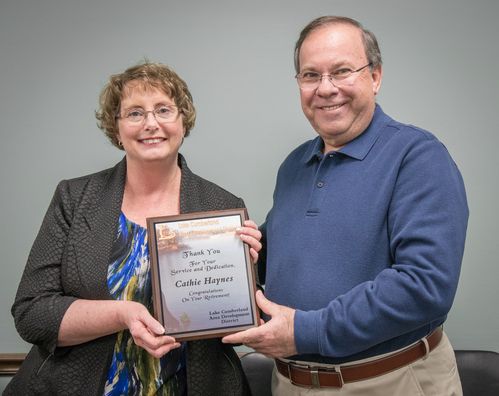 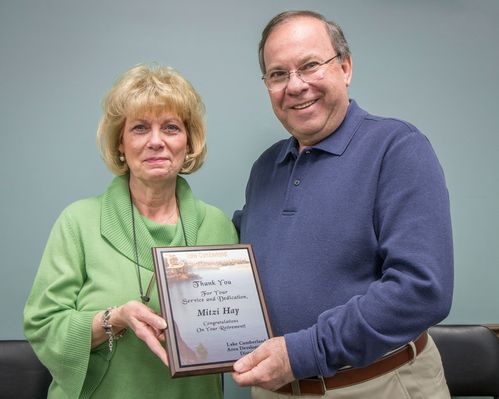 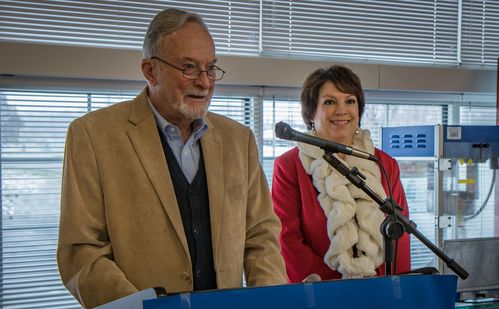 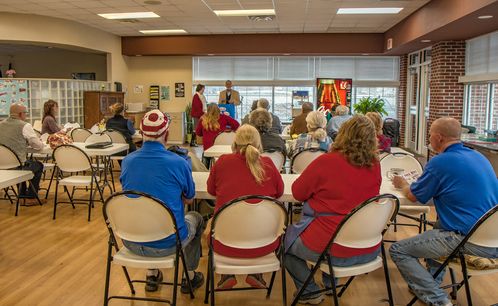 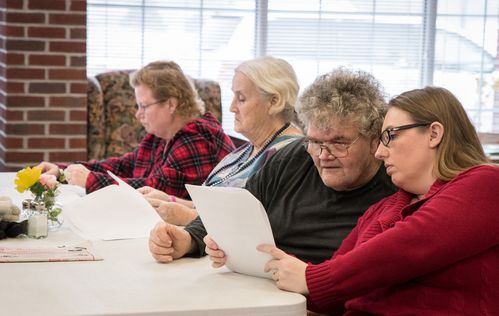 The Russell County Senior Center has planned the following events in April and June:

April 27, 2018 -- Community Hospice Day -- 7:00 a.m. to 10:00 a.m. at the Russell County Senior Center. This event is open to all senior citizens and to any agency that works with the elderly. There will be a free pancake breakfast, along with a meet and greet session with Hospice staff. Hospice staff will also share information about their current assistance programs.

June 15, 2018 -- World Elder Abuse Awareness Day -- 10:00 a.m. to 12:00 p.m. at the Russell County Senior Center. A member of the Elder Abuse Council will speak to spread elder abuse awareness during this health fair event. A number of agencies specializing in elder services will also have booths and be available to meet and share information with seniors during the event.

Senior center directors throughout our region work hard each day to create various social opportunities for their members. Here, Clinton County seniors pose for a group photo during the Valentine's Day party that was held at the center last week.

The City of Russell Springs has received an Area Development Fund (ADF) grant for $42,188.32. The city will purchase two 2018 Transit 150 LR vans, which will be leased to Senior Services at the Regional Kitchen for the purpose of meal delivery to senior citizens. Pictured, left to right: Darryl McGaha, Russell Springs Mayor Eric Selby, and Jeric DeVore. 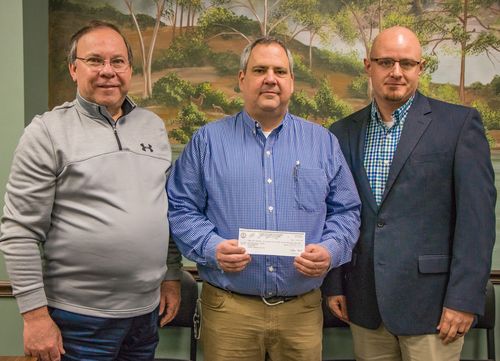 LCADD Seats 2018 Board of Directors

The Lake Cumberland Area Development District (LCADD) held its first Board of Director’s meeting of the year in January. 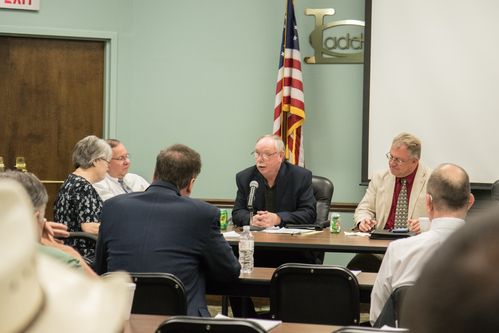 Central Kitchen Prepares and Delivers Thousands of Meals Each Month

Roger York, Central Kitchen Manager, and Robin Lawless, Assistant Manager, arrive at LCADD’s Central Kitchen each day at 4:00 a.m. to begin the task of preparing and then distributing hundreds of meals to senior center facilities located throughout the Lake Cumberland region.
Read the Full Story

Looking for employment opportunities within our region? Visit our Facebook pages: